One day in Strbske Pleso high up among the hills

We left Budapest on June 22 morning after breakfast in thge hotel. Suddenly the sky has turned gloomy and the morning temperature has come down to 15C. We were planning to sit outside and have breakfast in the open area. We decided to sit inside the enclosed area and enjoy our last breakfast in Budapest. It is unlikely that we would come back to Budapest, but who can predict those things. We may decide to join a river cruise one day and pass this city again.
We had a long drive ahead. We were planning to spend one day in a small ski town called Strbske Pleso. The town is in Slovakia, among the hills, closer to the border between Slovakia and Poland. We needed to buy a vignette to be able to drive in Slovakia. After passing the border, about ten kilometers into the country, there was a petrol station where we bought the electronic vignette. You do not have to display it in the car. The vignette is issued for the car registration number and the police can check it.
Mala has been driving the car all along. I was taking things easy, I am still in recovery mode after my two heart operations. She loves to drive and I love to watch the scenery on the way. We drove through some national parks and scenic mountain ranges. We also drove through many small towns. We had a short break at Zvolen and had coffee and cake in a small restaurant. 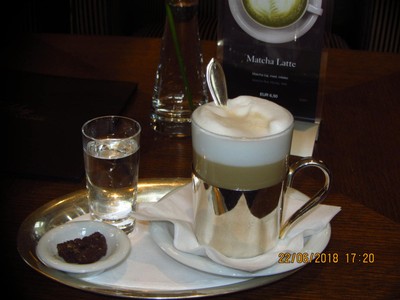 Latte served with a glass of water

Slovakian coffee is very mild. They serve coffee with a small glass of water. I was not sure what to do with water. Mala's explanation was that water was given to rinse your mouth after drinking coffee. Slovakia has it's own currency called Koruna or Slovakian Crown, but now they have adopted Euro as the official currency. They accept Euro in any shop. 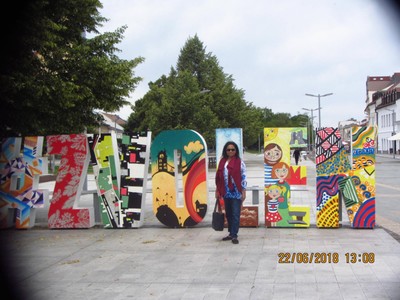 Grand hotel Kempinski is a five star hotel in Strbske Pleso. It is normally full in Winter ski season. It was also full during Summer holidays. When we arrived at the hotel, the outside temperature was 9C. The town is 1346m above the sea level and covered in snow 155 days of the year. We could only imagine what the hotel area would look like in Winter. We normally take on the hand luggage into th hotel leaving the big bags in the car. Mala does not allow me to carry bags. She got the reception to send a man to take bags from the car to the room. 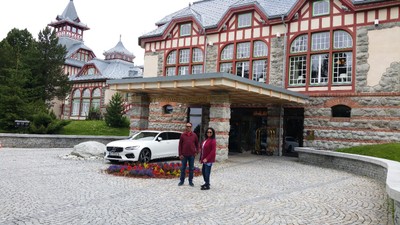 We got a room on the second floor without ant view. Mala called the reception and changed rooms to a bigger room on the fourth floor, with balcony and a good view. The hotel is backing onto a beautiful lake. Beyond the lake, you could see the range of mountains. 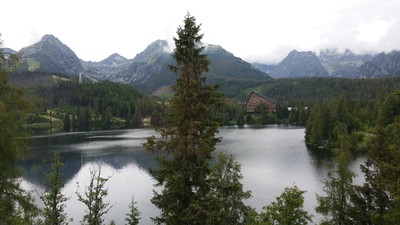 Lake view from the Grand Hotel

We have brought two jumpers, just in case we face unexpected wintery weather. This was typical winter weather for us. We wore the two jumpers and walked to the very small town certre. There was a food stall selling hot dogs and Langos. We had two hot dogs and came back to the hotel to have proper dinner in the hotel. 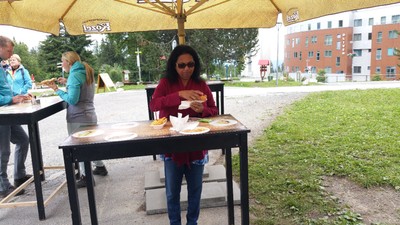 Having a hotdog at Strbske Pleso food stall

Back in the hotel we had two lattes. It was the same story. They make them very light. You drink your latte and then rinse your mouth with the water from the small glass. Our dinner vin the hotel was a different affair. It was a candlelit dinner. We wanted to try something authentic, a true Slovakian dish. Mala ordered Traditional "Tatra style" Piorogues ( Traditionelle Piroggen "Tatra Style" ). It was very similar to Italian Ravioli. 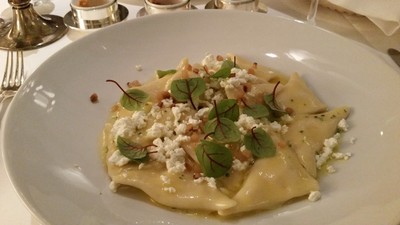 I ordered Confit of Wildboar Cheek ( Konfit von Wilds chwein Backchen ). I was told wild boar is local. Both dishes were very well prepared and very tasty.
We only had one night in this hotel. We had breakfast in the morning and left for Krakow in Poland. It was raining in Strbske Pleso and the rain continued all the way to Krakow.

( Krakow part to be added soon )

Previous Next Table of contents

This blog requires you to be a logged in member of Travellerspoint to place comments.

If you aren't a member of Travellerspoint yet, you can join for free.